Carbon is the topic of many Ag magazine articles. What role does carbon play in the soil?

Walden here. Carbon, which is usually called soil organic matter, is the stuff that makes your fields productive. I like to work in soils that are high in organic matter because they are porous and I can move through them with much less effort. The organic matter acts as a sponge between the mineral particles of the soil. This serves several functions. Since it is sponge like it greatly reduces the yield-reducing problem of compaction. Organic matter helps to keep the soil moist. I like moist soil because of my thin skin. High organic soil will take in rain fostering less run off. Loss of water, soil and crop nutrients lowers production leading to less food for us worms and less jingle in your pocket. Mr. Farmer if you manage your soil to maintain or increase soil organic matter we will both be happy. I enjoy having fun at every turn too.

From my underground library. Remember organic matter will absorb water the same way a paper towel or sponge will. To absorb is to engross completely and occupy wholly. The mineral portion of soil will only absorb water. Meaning water is held only in an outer surface, as is the case with playground sand. Soil organic matter is more than crop roots, residue and manure. It should be thought of as the engine that powers your soil. James B. Nardi, Biologist writes the following from, “Life in the Soil”, pg. 31 and 243. “As microbes and animals of the soil break down the remains of various creatures into simpler compounds, they add organic matter to the soil. Such organic matter also happens to be the main source of certain essential elements of the soil such as nitrogen, phosphorous, and sulfur. Eventually the organic matter transforms to tiny particles of a dark organic matter known as humus. Calcium, potassium and magnesium are leached from top soil and washed out of reach of plant roots unless they are bound by negatively charged particles of humus.”

END_OF_DOCUMENT_TOKEN_TO_BE_REPLACED 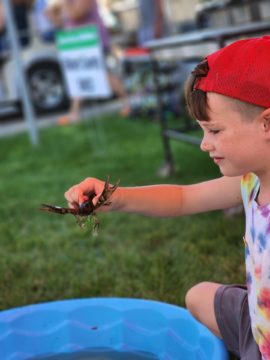 Carbon is the topic of many Ag magazine articles. What role does carbon play in...

Read More"Carbon in the Soil"

Have you ever just sat back and observed a child playing? When we give children...